What are the causes of fertility problems in men?

During my work as a Reproductive Endocrinologist the majority of patients I see are female. On a day-to-day basis the percentage of patients is, hands down, overwhelmingly lopsided. Some may wonder if this is because women have more infertility problems than men? My answer to this myth, is a resounding NO. Contrary to the notoriously common myth, men and women actually have a statistically equal occurrence of infertility. Imagine infertility as a three-way split- 1/3rd of all infertility cases are due to female-factor infertility, 1/3rd are due to male-infertility, and the final 1/3rd is often categorized as “unexplained.” So why is it that Americans often assume that a couple’s infertility struggle is most likely due to the woman? This is most likely because American women tend to seek gynecological care on an annual basis, and have more conversations with their doctors about fertility and their reproductive health. It is also believed that American men might be reluctant to seek advice regarding infertility- ultimately causing male infertility to be underreported in general. 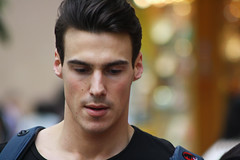 So, how would a man know if he is infertile? What causes male infertility?

Male infertility can be caused by a range of different issues. It can be due to innate reasons, such as hormonal imbalances or genetic disorders, or caused by more environmental reasons associated with a man’s lifestyle choices, such as drug use, inadequate diet, or even types of clothing.

Alcohol or Drug Use
Alcohol abuse, and the use of illegal drugs, such as marijuana or other recreational drugs, may diminish sperm quality.

Prescription Medication
Certain legally prescribed drugs may have side effects which
decrease sperm motility, shape, or count. Certain medications may also cause other sexual side effects including loss of libido or erectile dysfunction.

Some male-factor infertility may also be caused by medical issues such as:

Physical Trauma
Men who have experienced certain types of physical trauma or injury to their reproductive organs may experience infertility. Medical practitioners are seeing this more and more often with veterans who have been injured during their military service.

Illness
Common medical causes of infertility include cancer (most often testicular cancer in men), severe kidney disease, testicular disease, high blood pressure, and hormonal imbalances to name a few. Infertility can be caused by both the illness itself, as well as the treatment for the illness (such as chemotherapy).

Genetic Disorders
Problems with chromosomes can affect the development of testicles. The most common of these being Klinefelter’s syndrome- in which men have an additional X chromosome.

In addition to lifestyle and medical issues, infertility can sometimes be a symptom of psychological or behavioral problems:

Anxiety and Stress
Significant amounts of stress may inhibit a man’s sexual performance. Several recent studies indicate that excess stress increases the body’s production of cortisol and lowers the production of testosterone.

Emotional Trauma
Men who have been the victim of sexual violence or emotional trauma (often during childhood) sometimes report difficulty with sexual functioning later in life.

Gender or Sexual Identity Issues
A small percentage of men struggle with a variety of Gender
Identity Disorders, or confusion about their sexual identity. This confusion may in turn cause difficulty within the man’s sexual relationships.

The above lists are in no way exhaustive. If after reading this you’re left wondering if you are at risk for infertility, I would recommend picking up the phone and scheduling an appointment with your primary care physician. It’s important to take that first step and get the proverbial ball rolling, and have that initial conversation with your doctor. Sure, looking things up on the internet may give you ideas about which causes of infertility you might be dealing with, but the most direct way to specialized care, unique to your situation, is by talking to your doctor.

Dr. John Jain is a Board-certified reproductive endocrinologist and a pioneer in the field of reproductive medicine. He was federally funded by the National Institutes of Health and was appointed to the National Ethics Committee of the American College of Obstetricians. Dr. Jain has twenty years of academic experience including a decade as decorated professor of Obstetrics and Gynecology at the USC Keck School of Medicine. Which has given him extensive experience in the area of egg donors and and fertility.