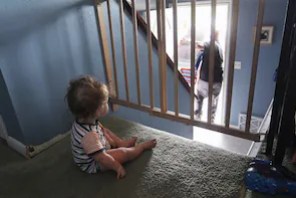 A new report from the Census Bureau finds that the number of dads who look after the kids has been steadily rising in the past decade: “Among fathers with a wife in the workforce, 32 percent were a regular source of care for their children under age 15, up from 26 percent in 2002.”

Lynda Laughlin, a family at the Census Bureau, attributed the change to the fact that rising unemployment in the aftermath of the financial crash seems to have kept more fathers at home, able to look after their kids — not to mention reduced the amount of money families have to spend on outside child care. The Wall Street Journal’s Conor Dougherty notes that real wages for men have declined slightly since 1978 while women’s rages have steadily risen, which may help explain the steady long-term shift in child-care dynamics.

In households with working mothers and pre-school age children, the Census reports, most care is given by family members — 30 percent by grandparents, 29 percent by fathers, and 12 percent from “a sibling or other relative.” In a different vein, 10 percent of kids aged 5 to 11 looked after themselves, while 30 percent of children aged 12 to 14 were so-called latchkey kids.